I’m reposting this recipe that I original developed in 2020 because I have some additional tips for you about it that I thought made it so much more scrumptious. Many of us can’t (and shouldn’t) eat corn. I know because I’m one. But I grew up eating corn and I do so love it. Especially when it’s corn season, like it is right now. I happened to get to the market this morning right after they’d put out a fresh batch of local corn.

If you don’t know when corn is fresh, here’s what to look for: check that the tassels are still moist or at least still have some green to them and are not turned completely brown and that the stem end is still green. If the stem end is brown, the corn is old and will have lost much of it’s flavor. Also don’t husk the corn until you’re ready to put it in the pot! A definite no no. And always steam corn, it should never be boiled.

My mother was a great admirer of Craig Claiborne, the food critic for the New York Times in the 1970s. When he published a cookbook, she had to have it. About a week later, she found a recipe in it for corn in which he said corn should be boiled. She slammed the book shut, said the man was an idiot and never read anything else he ever wrote.

Having grown up on a farm where my father wouldn’t eat corn unless he went out and picked it, husked it and brought it to my mother who had the steamer all set to cook it. And the bushels of corn that we’d blanch and cut off the cobs in September to freeze for the winter. My, it was a two-day affair.

So please, another tip, never reheat or cook corn in water. If you have frozen corn off the cob, it should be simmered in milk (such as oat milk) and some fat (of course my mother always used butter!). Corn has a milky base, not a watery one so cooking it in milk enhances the flavor.

So, today, even though I knew better, I added corn to this recipe. And of my goodness, it was so delicious and I suffered so desperately all afternoon after I ate it but the enjoyment and flavor was worth the few bad hours afterwards. Here’s the amended recipe, feel free to omit the corn if you can’t eat it.

Spray a 9×9″ pan with cooking spray. Mix the salsa, honey and spices together (I use a small whisk) and put a thin layer on the bottom of the pan. Arrange the thighs on top and then spread the remaining salsa mix on each thigh. Bake at 350 degrees for approximately 30-45 minutes depending on the thickness of the chicken thighs.

It’s that easy! You can serve it with brown rice to sop up all the wonderful flavors of the salsa.

PS: I gave the rest of the corn to my grandson so I wouldn’t be tempted to eat it myself!

With all my food allergies, I eat a lot of chicken so I’m always on the lookout for new, interesting chicken dishes. I don’t know how many of you subscribe to the magazine “Simply Gluten Free” but I’ve been a subscriber since their very early days when they were titled “Cooking Without.”

This last issue had a recipe for easy Moroccan Chicken which I thought sounded interested and it turns out it is very delicious. I’ve changed the recipe slightly to meet my tastes and decided to share it with you. Several cautions – cook in a slow cooker if you want but if you do it in the oven like me, be sure to cook at 350 degrees. I screwed up this time and used 375 and even with watching it closely and cooking no more than 1 hour, the top still scorched. So in the oven, be sure to cook at no higher than 350. It should only take 3/4 to 1 hour to bake.

Spray a 9×9″ pan with cooking spray. Mix the salsa, honey and spices together (I use a small whisk) and put a thin layer on the bottom of the pan. Arrange the thighs on top and then spread the remaining salsa mix on each thigh. Bake.

It’s that easy! You can serve it with brown rice, mashed potatoes or celery root. 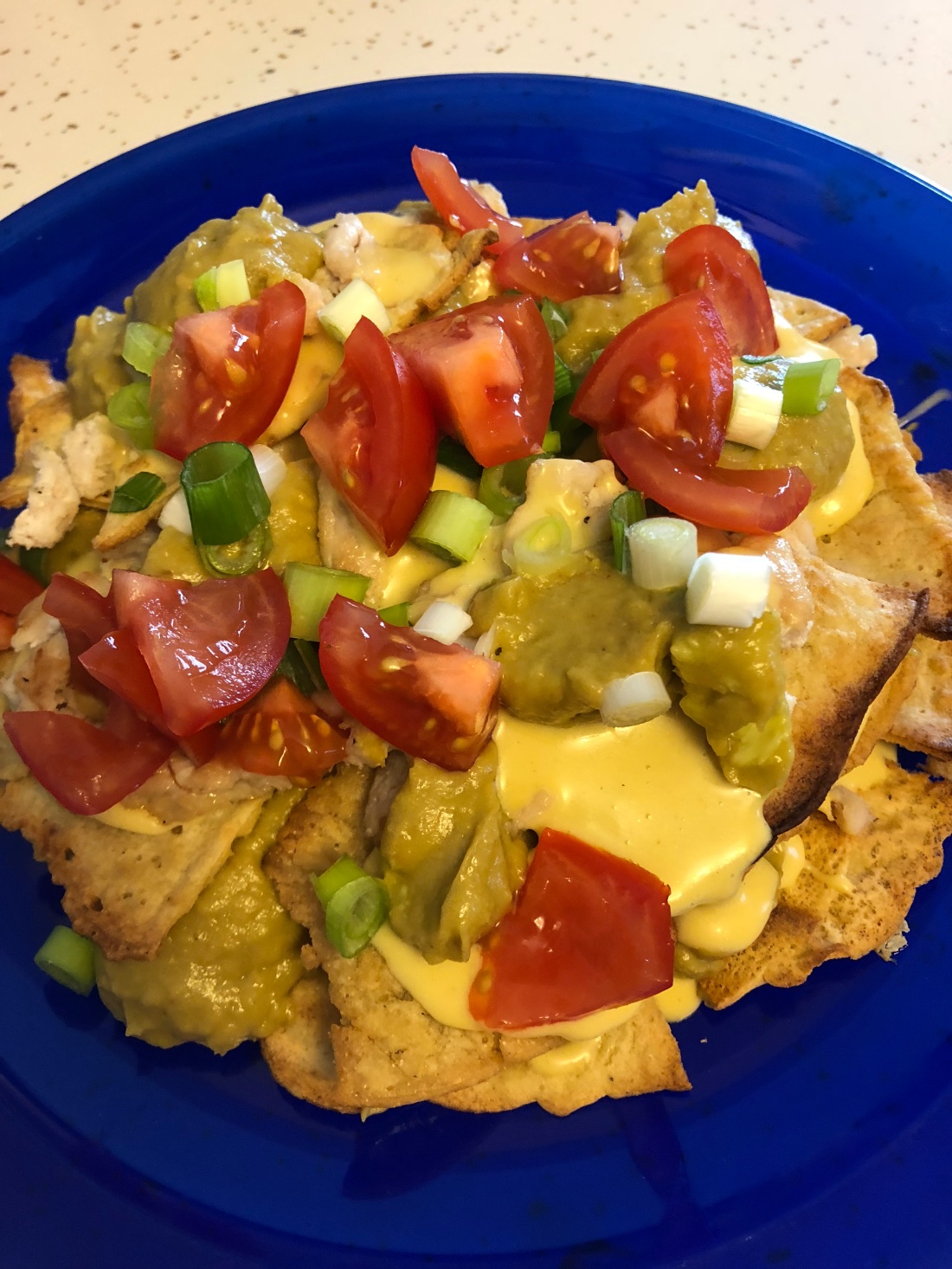 If you love nachos like I do, you’ll like this recipe.  I spent 12 years living in the Phoenix area and our favorites places to eat were the Mexican restaurants.  Now, with my dairy, gluten and corn allergies, I don’t get to eat nachos very often.  I found using this tortilla recipe, that the nachos stay sturdier; with regular flour or corn chips, they can get very soggy after the cheese sauce is added.  These did get a little soft but they still held up and everything didn’t spill off when they were picked up, even the ones on the bottom.  This recipe makes 3 tortillas or about enough a large plate of nachos.  As an appetizer, enough for 6-8 people but as a meal, probably only enough for 1-2.

First make the tortillas.  Combine in a quart bowl:

Whisk until all ingredients are combined and mixture is smooth.  Heat an 8″ skillet (non-stick) over medium heat.  When hot pour about 1/3 of the mixture into the skillet and, like a crepe, move pan to let the mixture cover the entire bottom of the pan.  Cook until small bubbles cover most of the tortilla (this will only take 2-4 minutes) and then turn over and cook for another 1-2 minutes.  Repeat for the next two tortillas.  Let cool slightly before cutting into eighths.

Meanwhile get the rest of the nacho ingredients started.  Combine in a small sauce pan:

Cook over low heat until cheese is completely melted and incorporated into the milk.  Whisk every few minutes.

If you like ground meat on your nachos, cook a quarter to a half pound of ground meat, seasoned with salt, pepper, and chili powder (optional).

Heat 1/4 to 1/2 cup of refried beans in a small skillet with a little oil (or if you want, a minute in the microwave).

You can use store-bought guacamole or make some.  I use a very simple guacamole recipe:

Combine in a food processor:

Blend until smooth.  I prefer a smooth guacamole but I know some people like it chunky so if a chunky one is preferred, pulse until desired consistency.  Add 1/4 cup pomegranate arils if  you like a little crunch in your guacamole (and they add a nice flavor as well).

These tortillas absorb oil like crazy so I didn’t deep fry them.  Instead, I used my air fryer and placed them in a single layer, air fried them for about 10 minutes or until crispy.

Then it time to make the nachos.  Start with a layer of chips, cover with meat and/or refried beans, top with cheese sauce and guacamole.  Repeat until chips are all used.  Top with some diced tomatoes and scallions.